In mid-July the good news came through that the Kinross Show, after an absence of 2 years, would go ahead on 14th August 2021. As Enid would be on holiday at this time Jo Ramsay agreed to co-ordinate the event. The call for volunteers to set up on the Friday and man the tent on the Saturday went out to both associations.

Friday 13th (!) dawned and praying for a dry day the set up team of Jo Ramsay, Elna & Robin Chisholm, Sharon & Andy Rivers, Martin Kay, John Hendrie, Angie Blake and Jean Andrew assembled on site from 9.30 am to erect the gazebo and arrange the displays. Although windy, the rain held off until we had the gazebo up, at which point a heavy downpour ensued. By 11.45am the displays had been prepared and merchandise priced.

We closed up the tent and left the site, crossing our fingers it would survive any bad weather overnight.

On Saturday 14th at around 7.30am Robin and Elna arrived on site and on approaching the stand saw that the wind overnight had managed to partially open the zips around the doors. Although displays had fallen over, we were thankful to see nothing had been damaged and we quickly set to tidying up the gazebo. Around 8am John Hendrie arrived with the observation hive that he and Jo Ramsay had set up on the previous day. The rest of the show day team of Jo, Andy & Sharon Rivers, Ruby Rennie, Tim Masters, Sheila Fisher, Joan Sneddon and Chris Myerscough began to arrive.

For the first hour the showground was quiet and all the team took advantage of this time to finally meet in person the people they had seen on zoom over the last 18 months. From 11am the site started to fill up and we quickly had many members of the public coming onto our stand keen to learn about bees and beekeeping, a challenge to which all our volunteers were happy to rise. A last-minute addition to our display was a hive brought along by Andy. This along with our observation hive proved very popular with the public. The next 5 hours were spent enthusiastically engaging with the visitors on all aspects of bees.

The show site was operating Covid-19 level 0 regulations, with hand sanitising stations around the site and masks being worn in tents. All contributors had to complete Covid-19 Lateral Flow Tests before being allowed on site and temperatures were taken for both contributors and public before they were allowed into the event. Despite this, for the first time in many months, there was a sense of normality and the atmosphere around the whole site was very happy and relaxed. As the day drew to a close the whole team agreed it had been a very successful and enjoyable day. This was added to when we heard that we had been awarded “The Best Small Trade Stand” prize. We were doubly pleased when we found out the reason for the award was given as – Our live display and our engagement with the public, particularly the children.

Thanks go to all the volunteers; a great day was had by all.

The FBA and DWFBA encourage any beekeepers to think about taking the Basic Beekeeping Certificate. The entry requirements for taking the certificate is to attend a Beginners Class and look after a colony of bees for at least one season. The examination is a practical / oral “over the hive” assessment and has 3 pass grades: Pass (60%), Credit (70%) and Distinction (80%).

It is a really worthwhile way to ensure you have all of the necessary skills and knowledge to help you become a really proficient beekeeper.

Information about the certificate can be found on the SBA website. Please do think about taking the examination, you might surprise yourself and get a distinction!

Here are some beekeepers taking their exam in Summer 2021

The continuing Covid 19 restrictions are making it very difficult for us all to meet at a local apiary to get some hands on experience of beekeeping. With this in mind we thought you would enjoy a little beekeeping quiz to see if you can identify some features of a hive. The photographs and quiz where made for the children at St Leonard’s School apiary by an FBA member, Jo Goodburn

Which part of the hive can you see here?

How many frames do you think the bees are living on based on this photograph?

What can you tell about the outside frames?

How many varroa can you see?

What else can you spot?

Which part of the hive are these bees on?

What would you be able to tell about this hive if you opened it and saw this?

What might you be thinking about as options to do for the following weeks?

This photograph is from the same hive, which part of the hive are we looking at?

Seeing this photograph, how would you change your answer to the third part of the photograph 2 question?

What are these bees doing, what type of comb have they made?

There were a large number of varroa present in the hive in the autumn, which we treated. Looking at this photograph would you say the bees were healthy?

I did a quick feed check on all hives in between Christmas and New Year. It was good to see that in most hives the bees were quite far down, which is good. I placed a block of fondant directly on top of the brood frames as a safety precaution. The end of January into February and March is the crucial time. The queen will gradually increase her laying and more food will be consumed to increase the temperature in the hive. This is often the time of year when colonies starve. This whole operation took less than 1 minute. It is important to be quick and not let the bees chill.

As this year has proved very difficult to meet up at local aparies Enid has recorded a few videos of some activities, including preparing for winter and bees with Chronic Bee Paralysis Virus.

As lockdown eased, a team of beekeepers (Enid Brown, Margaret Thomas and Jo Ramsay) removed a massive colony of bees from a cavity at a dwelling in Lethangie. A stethoscope was used to locate the exact position of the bees.  A handheld circular saw and a hive tool helped to remove the plasterboard so that the bees and comb could be reached. The bee comb was placed into a nuc box, the bees were hoovered up and all of the comb was removed … a very sticky job. The bees are now doing well in their new location. 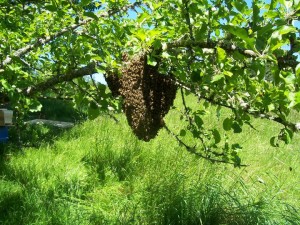 Check out the Scottish Beekeeper web site on Swarm Information