The Dunfermline and West Fife Beekeepers will be holding their Annual General Meeting at 19:30 on the 3rd of March at Portmoak Hall.
This will be a short affair and will be followed by a talk from Margaret Lear on

,Plants with a Purpose and Pollination

Researchers at the Natural History Museum have been scanning bee brains

After a few weeks of being offline the all new Scottish Beekeepers website is now available.
While you’re checking it out don’t forget the National Beehive Count organised by Beebase. If you’re not already registered with BeeBase this is a great chance to join. The site provides lots of useful beekeeping information and can help keep you up to date with potential issues in your area.

IFL Science has a summary of a paper in Proceedings of the Royal Soc. B on the antimicrobial properties of drone semen. 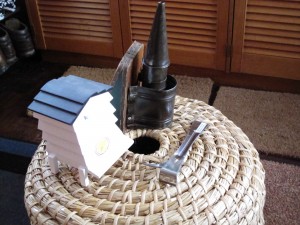 Dunfermline Library has been closed for sometime as a major project is underway to redevelop the site and create a new museum as well. Dunfermline and West Fife Beekeepers’ Association were approached to arrange for exhibits. It turns out that the future displays will be a mainly on-line resource and the actual exhibits in traditional museum cases were to be very restricted. An old extractor was simply too large but the museum staff were most interested in an old smoker which was tiny when compared with what we use nowadays.

The smoker was a type in common use before the last war. The parts were carefully cleaned and treated with a metal lacquer. The skep (in the photo) was destined to be used at the local association apiary and was made specially for us following a design for the old Scottish Pettigrew skep. The model hive was made by Ian Lindsay an association member and master woodworker.

We look forward to the opening of the new museum but judging by the building work this looks a long way off.

The December meeting of the Dunfermline and West Fife Beekeepers will be an early Christmas treat as we are playing host to Celia Davis, NDB, author of The Honey Bee Around and About and The Honey Bee Inside Out, as well as many articles in Bee Craft.

The talk will be at Portmoak Hall , Scotlandwell on the 3rd of December and will start at 19:30.

Entry £5 and includes refreshments. There will also be a raffle.

Next month the hangout will take place on 14th October and will be discussing the configuration of winter hives.

Great set of images from a recent TED talk.