First, our summer programme – print out and pin on your notice board and/or write into your diary. It will also be on the website. You will see that as a general rule FBA meet 2pm on Saturdays and DWF 2pm on Sundays though there are a few joint demos which are the exception to the rule. Beginners are welcome to all meetings of their association except those for Intermediates.

We will email before noon on the demo day if it is cancelled, so keep your eye on your emails if weather looks uncertain. 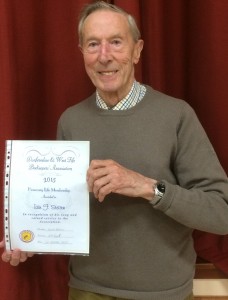 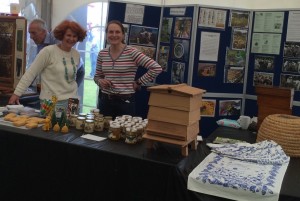 … and John and Janice stewarding at the 2015 Fife Honey Show: 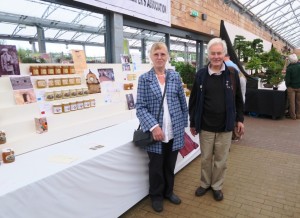 …and Polly making up frames: 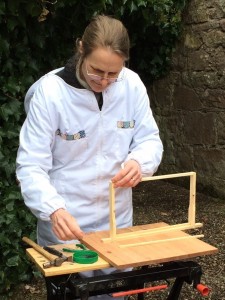 12 Nov 2015, The Times, Oliver Moody, science correspondent: Stone Age settlers had a taste for honey. Bees are among mankind’s oldest and closest friends, according to a study that has found that ancient farmers were using honey and beeswax at the dawn British agriculture…. Scientists have now found evidence that Stone Age settlements were taking honey out of beehives 9000 years ago, and that bees have been in this country for much longer than was thought … Fragments of Neolithic clay pots found beneath Eton rowing lake had demolished arguments that the Romans had brought honeybees to Britain ….They analysed 6.400 pieces of Stone Age pottery from more than 150 archaeological sites (in Ancient Europe and Turkey) and found that 81 had beeswax residues….

The honeybee weather forecast. Honeybees may be able to predict the weather to help plan their workday and avoid downpours. The discovery was made …. after attaching radio-frequency identification tags to 300 worker bees. The bees spent more time out of the hive foraging and stopped work later in the afternoon when the following day was a rainy one. They seemed to be responding to changes in humidity, temperature and barometric pressure that precede rainstorms…

Thurs 21 and 28, beginners classes 8 (diseases) and 9 (making up frames and hives), Portmoak

That’s all for now, hope to see lots of you at the summer events! Janice